As you may or may not know with the help of the Knight Foundation and the Reynolds Journalism Institute I’ll be organizing a round-table in Missouri with a host of special guests. The goal of this round-table is to discuss topics we hear about all the time, but from the unique perspective of the conference attendees. Who are the attendees. That will be revealed shortly but the quick explanation is that they are not at the centers of power, but rather are people creating their own centers of power.

In order to foster a strong round-table I wanted to spur conversation among this group BEFORE the event takes place. In an effort to do this – we re-started the Carnival of Journalism. Welcome to the party! The first few rounds are on me! 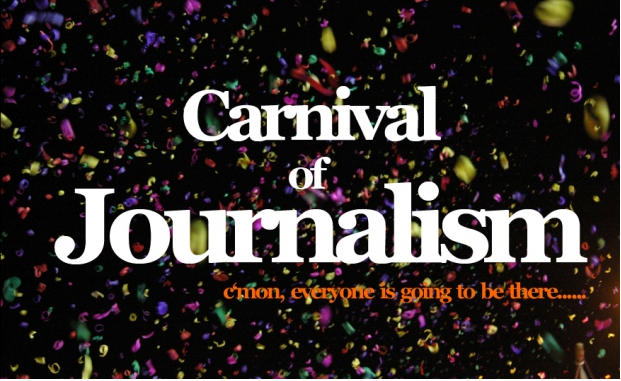 Below will be my humble contribution as an individual. Soon I’ll do a wrap-up post that links to all the other participants who joined us in discussing this topic and wow WHAT A GROUP! I’m excited to see what happens as the “COJ” moves forward. I’m a big believer in social media, Twitter, Facebook and all our fast moving conversation. My hope is that the COJ might give us space to reflect on larger issues. So wait for the wrap-up post which will appear here and at Carnival of Journalism soon. Then, feel free to digitally meet your fellows carnival goers, mingle, drink, be merry, debate (at a high level of discourse) then go fourth and journalize.

This month’s topic and my humble contribution: The changing role of Universities for the information needs of a community: One of the Knight Commission‘s recommendations is to “Increase the role of higher education…..as hubs of journalistic activity.” Another is to “integrate digital and media literacy as critical elements for education at all levels through collaboration among federal, state, and local education officials.”

My post here will be greatly surpassed by the aggregation of everyone’s thoughts. But since this is my blog – here we go!

Universities have a unique advantage in this “changing media environment.” They are sheltered from economic realities. True – they do have a bottom line, but it is not governed by the same forces. Journalism programs don’t need to focus on the ad-spending rates of print vs. digital because it impacts whether or not a professor will have a job. They focus on it to the extent that it impacts their students lives once they leave the hive. With that advantage comes great responsibility. Yes, just like Spiderman.

In addition to this unique advantage – Universities have a distinct disadvantage. The reporting is done from within a university. When I went to Columbia’s J-school I worked on a project NYC24. It’s a great way to learn skills but the finished content felt as though it was placed behind a glass case – it was museum work. Aside from my parents and other class mates who stared at it – the impact was minimal. Being voted the EIC of this site was like being the hallway monitor (Our EIC went on to be do PR for Karl Rove – not a joke). Combine this with trying to get a call back when you say you’re a journalism student and you’ll understand what I mean by saying – it’s implication and attraction to the rest of the world is null and void. I like programs like News21.org, but I fear it’s more of the same. Now instead of just one j-school website behind a glass wall, we have several j-schools.

Taking those two things into consideration – I would make two specific recommendations for the changing role of Universities in regards to the information needs of a community.

ONE RECOMMENDATION: There are a few University projects that have shed the “museum” feel. In the Bay Mission Local is a bright shinning example. In Los Angeles check out Neon Tommy. I credit it almost completely to Lydia Chavez and Marc Cooper respectively. But since cloning them isn’t a strategy, I’d guess the following elements also helped.

(a. Neither are seen as ‘necessarily’ associated with the university. Rather – the sites have a unique flavor and they ‘happen’ to be associated with a university. Again, this is a tough nut to crack and I think requires individual professors like Marc and Lydia to be given the space and resources to produce independent sounding/standing projects.

(b. Partnering with other news organizations. This is a touchy subject because for some it sounds like student labor to prop up failing organizations – flooding the market with cheap labor so professional journalists can’t get hired. See UC Berkeley’s collaboration with The Bay Citizen. Watch carefully Patch and other universities.

Bottom line: I see almost NO reason why there should be a “student” newspaper at the graduate level. Or why any “student” work should remain such. It’s the real world. If journalists want to complain about pajama bloggers – why not add journalism students to the mix 😉

On a broader level I want to talk about universities outside of j-schools.

RECOMMENDATION TWO: Universities play an important role in their communities beyond just being diploma mills that collect tuition. UC Berkeley is, historically, a great example. (See “Berkeley in the 60’s). In relation to this journalism students should be working with students from history, communication and other departments to train them. Yes, you heard me. Journalism students should be teachers. Journalism is no longer the art of story-telling. It can also be the art of story-enabling. If there was one change I’d want to see in curriculum across the board it would be to envision a class whereby journalism students find ways to get the broader student body involved in media projects. This, I believe, is the biggest change that needs to happen.

Or flip this on its head: History, communication, sociology, etc – all these departments should include journalism into their curriculum. Journalism doesn’t need to be done by big J-Journalism students. At the undergraduate level why isn’t every history major tasked with creating a blog and covering one local issue or partnering with journalism students? After all what is history but really really slow journalism 😉

In short – the first recommendation implies concrete implications from student work. Call it an “Ameri-corp” if you will, although I hate that analogy (hoping Conor from Localocracy picks up this topic as I’ve heard him champion it before).
My second recommendation: We’re too involved in our own journalism programs. Knight (or some other entity with a ton of money) should find a way to lobby/change curriculum in other departments to include elements of journalism. EVERY student should leave college with some experience of reporting and writing.

And for extra credit!

Check out what Jarvis is doing at CUNY. There needs to be more of this. The goal here is not to cover a region, but to innovate. And not just in an academic setting. For some students his class even turned into real funds to start a project. Obviously we can’t do offer that at every journalism program – but we can create space to be creative.

Journalism is an interesting thing to teach in the first place. We call it a craft and yet I have a “Masters in Science” of journalism. It’s everyday history and yet it’s a blue-color practical job. The academics of it and the application of it are two distinct things.
For the sake of how Universities can get involved in the information needs of communities – they have been and always will be hubs. In the 60’s that mean giving a space for picketing. That lead to the shooting at Kent State, a tragedy for sure, but also a national moment. A space for the country to face itself in the mirror. Universities need to provide the same digital space today.

6 thoughts on “Carnival of Journalism – Universities and their Role”