For a long time I’ve had a post inside of me dying to get out. A few months ago I was invited to speak at the International Symposium of Journalism with Dan Gillmor, Ethan Zuckerman and Jan Schaffer. The presentation I gave is here. I got a great chuckle from the second and third slides.

But there was one slide which almost made me re-do the entire presentation. Because it struck me as something worth exploring. It was slide seventeen on “Transparency” seen below. 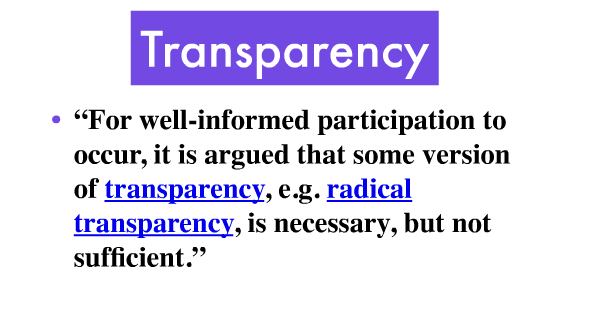 This quote comes from Wikipedia.

“For well-informed participation to occur, it is argued that some version of transparency, e.g. radical transparency, is necessary, but not sufficient.”

Perhaps it stood out to me because of the “necessary, but not sufficient” which flashed me back to logic class when I was a philosophy undergrad. For whatever reason – I dwelled on it.

I’ve dedicated the majority of my career to two things in this order: Increasing participation in journalism and increasing transparency in the process of journalism. Something I’ve zenned out on recently is how connected the two are and how we often treat them as mutually exclusive.

I’d argue that we need transparency in order for journalism to become more participatory. How can we expect people to participate in the process of journalism if that process is opaque? Only a fool dives into muddy water.

Which means the next topic should be “An Ethical Argument for Participation in Journalism.”

Now a confession: It’s late at night and I’m tired. In fact, the only reason I started this post is because I can’t sleep. Perhaps now that I’ve started this thread, I’ll count some ZZ’s. But you, dear reader, can help me. What is the ethical argument for participation in journalism as you see it?