I know this because Erica Smith knows this. These numbers are arrived via her site Paper Cuts which she started as a non-scientific way of estimating newspaper layoffs.

Here’s the nut graf: Eight months into 2010 and we are still shy of 2,000 layoffs or buyouts. Now, if there were ever a number you’d want to see lowered, it’s this. But it does raise an eyebrow. 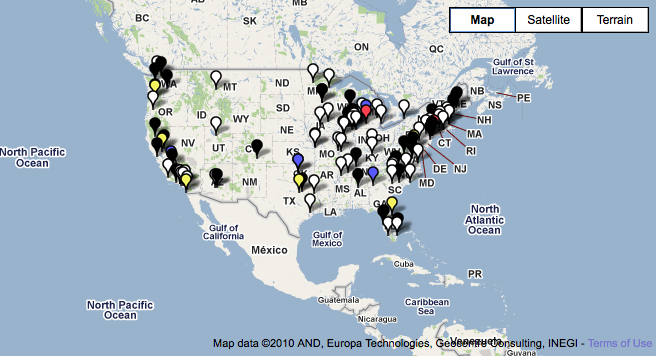 This is a dramatic shift. I thought maybe it was a mistake so I contacted Erica, who I’ve had the pleasure of meeting, to see if it was accurate and if she had any thoughts. Her quote below.

Either I’ve gotten back at tracking them down or, more likely there’s no more meat on the bone. There’s not much bone left either. The only cutting left seems to come from outsourcing and consolidating. Granted, there are several black pins on the map [for 2010] — those are “unknown” markers — but not enough (I hope) for 14K.

I do expect I’ll be adding more layoffs in the next two months, though. A few details are coming out on Gannett’s consolidation plans. Here at the Post-Dispatch, our “no-layoff” guarantee ends Sept. 28; I don’t see that ending with punch and cookies. And as more fiscal years come to an end, more papers are going to be looking at their budgets and making cuts … somewhere.

I don’t know what the drop in cuts signifies. It could be a good thing (newspapers are bouncing back – unlikely) or as Erica notes – it could mean they’ve cut down to the bone and there is nothing left to tighten. Either way this is something to note. Something has shifted.

6 thoughts on “Are the Paper Cuts Over?”