That disclosure behind us, something a lot of people don’t know about me – I’ve been watching Glenn Beck every day for the last nine months (maybe longer). 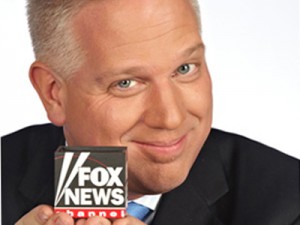 I’ve always been open to varying opinions. In fact, I seek them out. This is not me on a journalism high-horse. It’s genuinely who I am. I don’t necessarily like arguing (I’m not a comment troller that goes around picking political fights) but I like to try and understand people and their motivations.

I think there are two inspirations for this. As a kid I distinctly remember my father would occasionally turn to the the Christian channel and watch televangelists. Part of it was him mocking their style (proselytizing is not part of the Jewish culture and I think many are turned off by it) and part of it, I think, was just to expose himself and me to the fact that other people approach the world with radically different views. For them – this wasn’t just good television, it was a way to navigate how one should live their life.

The second inspiration has been the idea of a “bizarro Dave.” I picture somebody my age, similar height, similar loving childhood, intelligent, etc, etc, etc. We are alike in so many ways except I grew up in Los Angeles and he grew up somewhere else. As a result, not only do we have a different view of the world and our country, but we can’t even start to converse about the differences. There is no similar ground upon which to start. I want to meet bizarro Dave. I want to understand him and perhaps selfishly, I want him to understand me. Could bizarro Dave and I ever start to at least agree to disagree?

So that’s the inspiration behind watching Glenn Beck for the last year. When I confess this to some of my other media-elite, SF, communist bastard friends, they wonder what I’ve gleaned from it all. It’s one thing to watch some of his out-takes or Media Matter clips and judge, but it’s another to immerse yourself in the world of Beck. Some observations and thoughts below.

Glenn Beck is not dumb. In fact, he’s articulate, he thinks on his feet and is very charismatic. To dismiss him as an idiot or to assume people caught under his spell are idiots is a disservice.

2. He can be very convincing.

I’d by lying if I didn’t say that a few times while watching Glenn Beck over the months my heart started to race and I thought it was time to invest in gold and build a panic room for the oncoming American dollar apocalypse. Luckily, I also watch The Daily Show every day and it would help remind me part of what I’m watching is a show. An entertaining show the same way post-apocalyptic movies can be entertaining. It doesn’t mean I’m about to study Mad Max for advice on how to plan my future.

When people say that he can work up a frenzy and scare people – it’s true. If you let your critical thinking guard down, you’ll be shaking your fist at everyone who “just doesn’t see” what’s happening. In terms of a media diet, if all you watch is Glenn Beck, then you’ll be convinced America is a stone’s throw away from a third world country.

People have asked me if I think Glenn Beck is lying or if he really believes what he’s saying.

Of course nobody can know another persons’ mind, but I think he genuinely believes everything he says. If it turns out the whole thing is an act, then he deserves an Oscar, Emmy and a Grammy just for good measure.

It’s a big if, but here’s what it comes down to: Religion. The “conspiracy theories” all make sense if (and for me it’s not an ‘if’ I accept) you are an evangelical Christian.

If you believe, in your heart of hearts (as I think Glenn does) that Jesus is the only path to a noble and saved life, there is a Satan and that earth is a battlefield for the two – then everything that is playing out on Glenn’s show makes perfect sense. More than anything I believe Beck is a televangelist turned political pundit.

In Beck’s worldview there is little room for shades of gray. We live in a world where there is pure good and pure evil. The teachers unions, Marxists/Anarchists, Soros, etc., are manifestations of evil. At best, most liberals (and union members) are sheep being duped.

This “tricked” factor plays very well into Christian folklore. Your average liberal is being tricked just as Eve was by the snake to eat that god-damned apple. Glenn sees himself as somebody trying to warn against the apple.

I think it is this classic Christian narrative that appeals to so many people. Much like Bush, Glenn speaks the language of evangelical Christians. Sometimes he does so overtly and other times it’s much more coded. Many (I’d argue most) of the ideological arguments Beck makes boil down to a religious foundation of good vs. evil. If you share the same foundation, then it’s not hard to follow his train of thought on most issues.

5. Glenn Beck as manifestation – not cause

With this understanding of Beck, I’ve begun to regard him as more of a symptom or manifestation of a certain worldview – not its cause. He doesn’t cause hysteria, but he explains why a segment of our population feels panicked. Whether it’s the war on Christmas or the war on prayer in schools, Beck is able to hone in on these fears and represent them. Then he extrapolates out further showing the same ideological underpinning that makes one side attack prayer in school (liberal satanists) and the other side want to defend prayers in school (conservative’s saved by Jesus) and connects them to other issues. In the Middle East the communists, anarchists and radical Islam elements (re: heathens) have joined forces to topple the governments and now threaten Israel (the land of God).

The point is: Beck is very good at tapping into natural fears and exploiting them. I don’t think he is the genesis. (get it Gensis!)

Will I keep watching Beck?

Probably not. I became fascinated with him as a commentator and I wanted to give him more credit than just writing him off as a loony. That’s for MSNBC to do 😉

Instead – I wanted to take the time to really uncover just what it is that he represents. What cultural barrier was it that he was taping into. I feel I’ve come to my own understanding. And just in time for him to leave Fox.

17 thoughts on “My Year with Glenn Beck”