For a long time I hated discussing politics. In fact I said as much to Jay Rosen back when I worked with him around 2006. That might have been the height of my distaste for the topic.

At Block by Block Jay reminded me of this. We were catching up and he started to discuss the 2012 election and he paused, as if to apologize, “I know you hate discussing politics.”

I admire that Jay remembered this about me. Or maybe it caught his ear as strange back when I said it. Either way, my view has changed drastically.  How did I go from contempt about passing conversations of politics with friends to dedicating a year to watching Glenn Beck every day? That’s what this post is about.

You may laugh at how I got turned on to politics – and that might even be the point.

I credit The Daily Show. 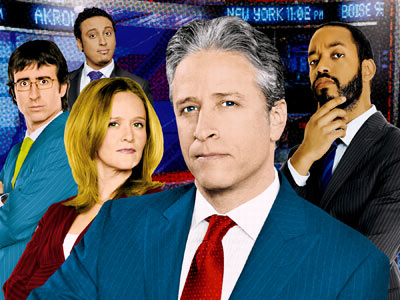 It goes without saying that I’m a big fan. In fact, I watched The Daily Show before Jon Stewart was the host (Craig Kilborn) and it had a more Onion-esque quality to it.

But what exactly is it that The Daily Show opened my eyes to? In short: The horse race coverage of….. everything. But let’s stick with politics for the moment.

The way broadcast television covers politics is absurd. I grew up with it. It’s all I knew. The main reason to watch news about politics was to find out who was winning, who was losing and who made a ‘gaffe’ which would effect their winning/losing status. That was it.

The Daily Show is not political satire. It’s media satire. This is why the show has remained relevant beyond the Bush administration. They never made their mark making fun of politics, who was winning/losing. Their insight was in how the media portrays our world. There is an entire generation out there who never liked the Katie Couric, Dan Rather, Walter Cronkite news personality. We’re spoon fed Cross Fire, The No Spin Zone and other absurd shows and made to believe that this is the way adults have to engage and converse with the world. Somehow I always felt like it was silly. Why would I want to discuss politics if the only frame of reference I have were these people.

That’s the beauty of The Daily Show. It showed me, and countless others, something we all internally felt. That this window through which we were observing the world was warped and that we had a better sense intuitively of how to engage than they did.

Of course, none of this is news. There has been far better analysis of The Daily Show than this post. But for what it’s worth – here’s my testament.

My biggest criticism is actually just how it focuses on broadcast news. You can tell Jon Stewart has a distaste for social media and the power of the Internet. Then again, this is a new medium, the underdog medium. It is far less in need of satire and perhaps there will be a time when television media has faded and there won’t be a need for The Daily Show. Until then – I’m glad there is a voice out there reminding us that what we see on television is entertainment first, informative second.